Things to do in Dunsborough – Western Australia 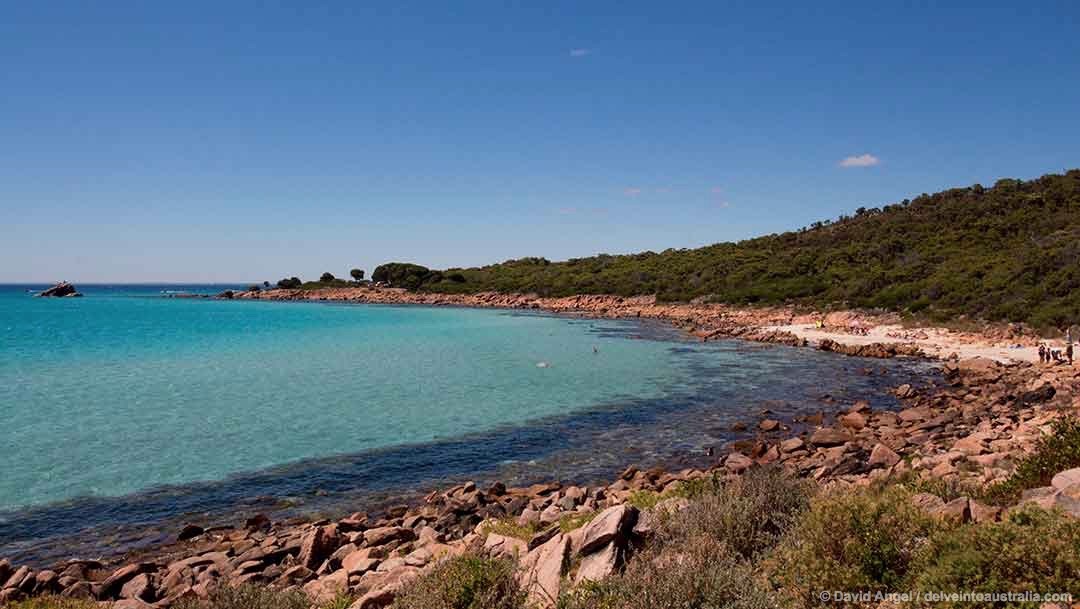 Dunsborough is also a great base to explore some of the best beaches in Australia. Several of these are located just to the north-west of the town, facing the relatively calm waters of Geographe Bay, which stretches east beyond the city of Busselton.  The water here is among the clearest we have ever seen, and is a glorious turquoise colour in contrast to the bright white sands. The west coast of the Cape Naturaliste peninsula is very different in character, getting a buffeting from the Indian Ocean and attracting surfers to some of the best surfing spots in Australia.

As the wineries have grown, so have the dining options in the area, so it has also become a gastronomic mecca as well. As well as the wineries, some breweries have opened up and other producers have set up to take advantage of the fertile soils of the area, cultivating produce ranging from olives to lavender to cereal crops. In turn, attractions have opened to cater for families and children, and there is a great deal of accommodation in Dunsborough to choose from, from private rentals to international chain resorts, which we’ll be covering soon in an accompanying article.

So here is our guide to things to do in Dunsborough. 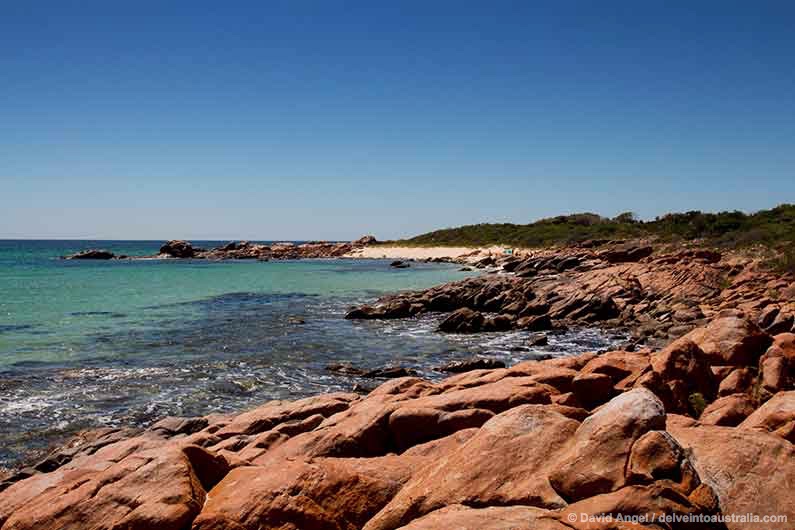 Another gorgeous beach near Point Picquet, close to Dunsborough

I’ve been fortunate and privileged to see some of the most amazing beaches in the world. To name a few, I have explored some of the most exquisite beaches of the Mediterranean, the windswept sands of the North Atlantic, the incredible rock formations of Qeshm Island in the Persian Gulf, the endless sand bars of the Baltic, the legendary surfing beaches of Portugal, the coast of southern California and the iconic Pacific Ocean beaches of east coast Australia. But nothing had quite prepared me for the Margaret River beaches, especially those around Dunsborough.

The beaches on the west and east side of the Cape Naturaliste peninsula are distinctly different. Those to the east, including Dunsborough and up as far as Eagle Bay, are on the sheltered shores of Geographe Bay, and the calmer waters tend to attract sunbathers and swimmers, whereas the beaches to the west of the peninsula are more exposed to winds from the Indian Ocean, and are more popular with surfers. 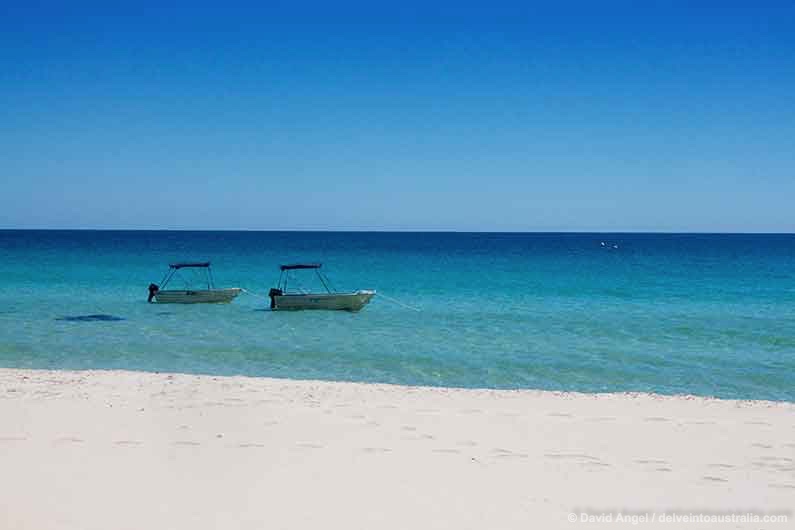 But it was the beaches to the north of Dunsborough on the Geographe Bay side that struck me the most: white sands, gorgeous shallow turquoise water, framed by orange granite rocks under a completely clear blue sky. These form the Meelup Regional Park. They made for an incredible sight – I had seen images of them before travelling, but nothing came near doing them justice. This was sensory overload for the eyes. I just had to sit, breathe slowly, take it all in, close my eyes and relax. Then I had to open them again to make sure what I had just seen was real.

For us, the best of the beaches around Dunsborough are between the quiet Castle Bay and Eagle Bay Dunsborough, including popular Meelup Beach and the two small beaches at Point Picquet headland, off Eagle Bay Meelup Road.

Faye is the family fish and said she hadn’t swum in water this clear and pure anywhere in the world.

when its unsuspecting occupant was surprised by a strong rip current that took it away from her in seemingly tranquil water off Eagle Bay. We heard that the koala was later rescued by a boat out in the bay but this showed how you need to be aware of dangers, even in seemingly benign conditions. 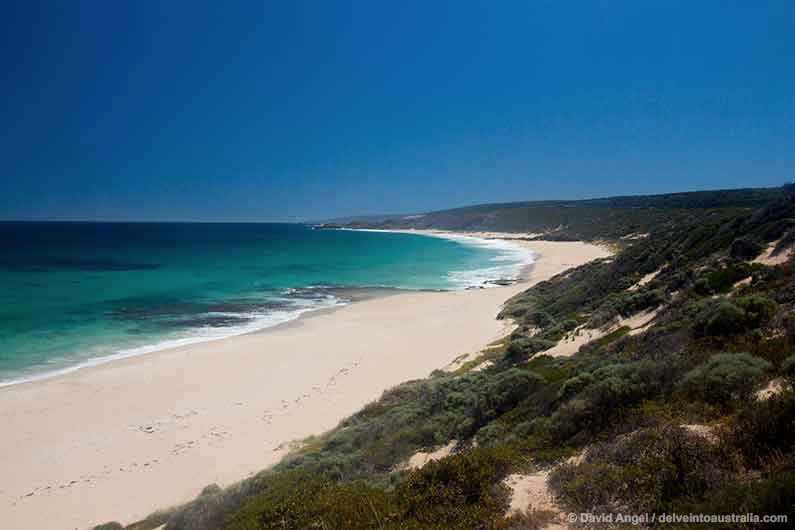 Some of the best Margaret River surfing can be found on the coast to the west and north-west of Dunsborough, the section of coast which bears the brunt of the south-westerlies from the Indian Ocean, and are part of the stunning Leeuwin-Naturaliste National Park.

By far the most accessible surfing beach in the vicinity of Dunsborough is Smiths Beach Yallingup, a vast curve of golden sand. A statue of a surfer overlooks the beach – a monument to the beginnings of surfing in Western Australia, and the discovery of the bigger waves of the coast around Yallingup. 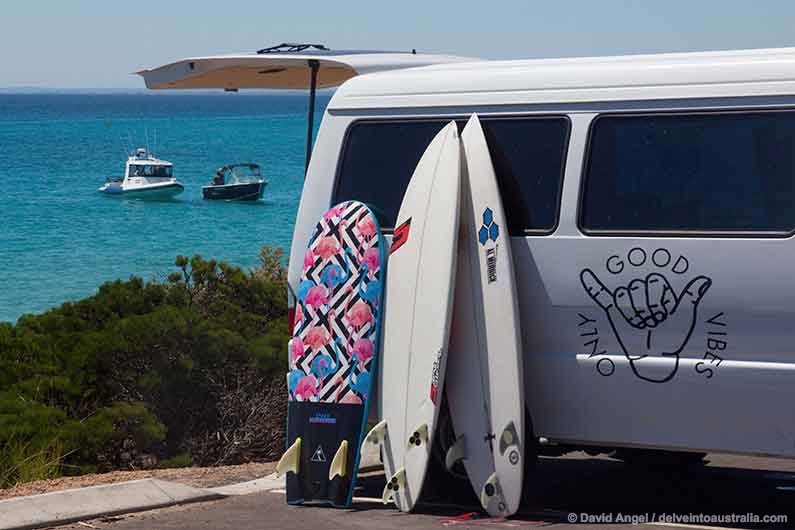 Several other Margaret River surf beaches can be reached by conventional two-wheel-drive car, including magnificent Injidup beach, a few miles to the south of Yallingup, an inviting sweep of sand culminating in a tall outcrop of dunes. Moses Rock and Guillotine also have good road access. Others like Honeycombs and The Window are only reachable by 4WD down dirt roads, while the likes of Three Bears, up near Cape Naturaliste, are even more of an adventure, accessible only on foot. 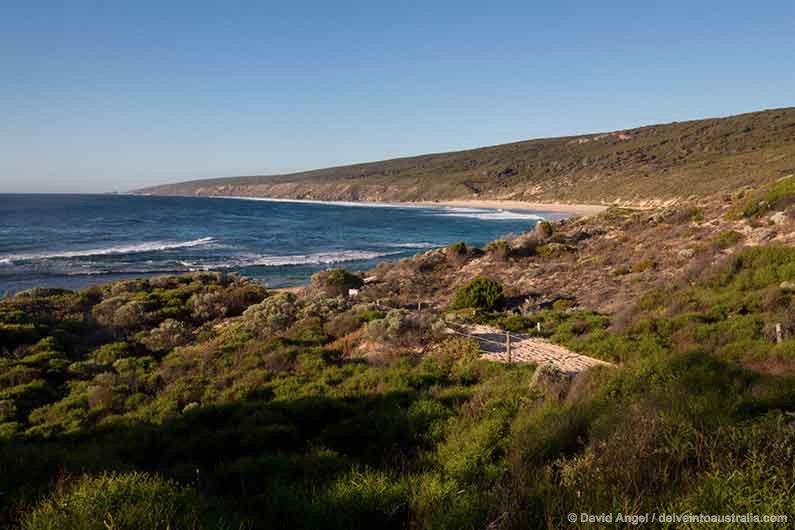 Dunsborough also has some wonderful coastal walks to explore. The long-distance Cape to Cape Track is the obvious draw, and it’s possible to do sections of it as day walks, particularly from Yallingup to the Cape if you can arrange a lift back.

On the Geographe Bay side, the Meelup Reserve Trail is a relatively short hike of around 8 km (5 miles) from Old Dunsborough to Meelup. It takes in some of the aforementioned sublime coastal scenery, including the stretch from Castle Rock to Castle Bay and onward to Meelup. It then climbs a rocky hill inland from Point Picquet before descending into Eagle Bay and continuing onto the beach there. It’s a fairly easy day walk, especially with an early morning start. 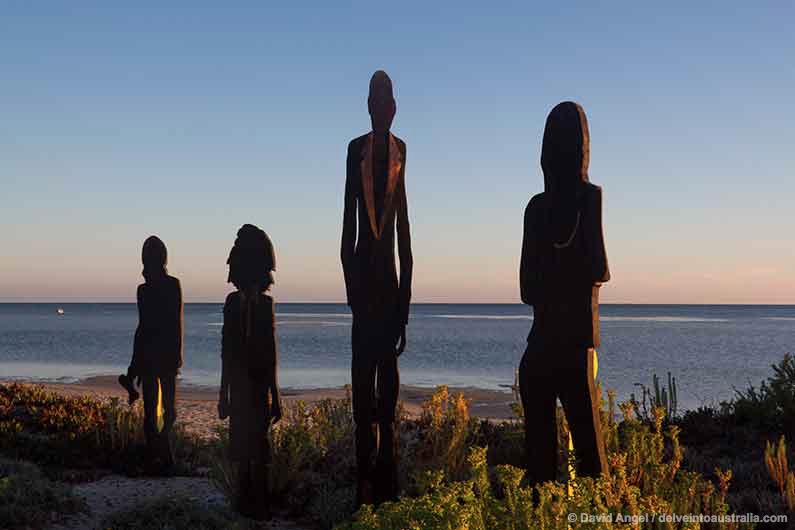 Sculptures on the Dunsborough foreshore

Dunsborough beach foreshore, a minute or two from the town centre (or CBD) and the one beach within walking distance also deserves some exploration. In the mornings it’s fairly quiet except for a few runners and people fishing, the water calm like a millpond. It’s a wonderful place to watch the world wake up, as the beach gradually gets busier with swimmers and sailors.

My personal favourite is along the Eagle Bay to Meelup Road, which links these two outstanding beaches, also passing the small rocky coves around Point Picquet, offering glimpses of Eagle Bay through the trees as you approach the village.

The approach down Yallingup Beach Road is also stunning, the roadsides framing the spectacular coastline just below.

Most of the other roads in the Dunsborough and Margaret River region are inland, and are a pleasure to drive, especially the tree-lined avenues leading to some of the vineyards and wineries, and the long Caves Road which takes you south from Yallingup towards Augusta and Cape Leeuwin, a beautiful drive through the shadows of the forest and dappled light falling across the road. 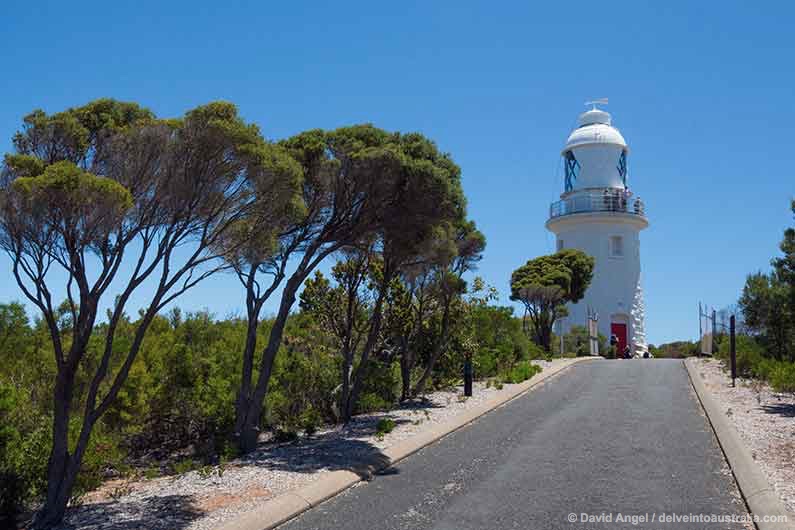 Cape Naturaliste lighthouse sits near the northern end of the peninsula, with outstanding views over the Indian Ocean to the west and the calmer waters of Geographe Bay top the east. It’s around 15 km from Dunsborough – a 15-to-20-minute drive if you take the direct route, which we didn’t.

It’s the end (or start) point of the Cape to Cape Walk which runs all the way down the coast to Cape Leeuwin near Augusta, and is around 125 km in length, and we met some Canadians who were completing the seven-day trek and about to reward themselves with double espressos and muffins from the café just below the lighthouse.

It’s a short climb of 59 steps to the viewing platform at the top of the lighthouse, which you visit as part of a guided tour.  As we were short of time, we opted to explore the lighthouse precincts instead, with a brief stop for coffee and cake at the Goose café in the beautifully restored lighthouse keeper’s cottage.

Ngilgi (pronounced Neelgee) Cave is one of several limestone caves in the Margaret River region, and the closest of them to Dunsborough and Yallingup – it’s only a few minutes’ drive (10 km) from Dunsborough town centre.

Ngilgi was discovered by European settlers in 1899 and initially named Yallingup Cave, it has been renamed in acknowledgement of its indigenous heritage. The local Wadandi people are custodians of this and the other caves to the south.

Its name comes from a good spirit, Ngilgi, which triumphed in a battle with an evil spirit, Wolgine, according to Wadandi tradition.

We weren’t able to visit the cave during our trip, but several people with whom we spoke recommended it, especially for the spectacular rock formations. 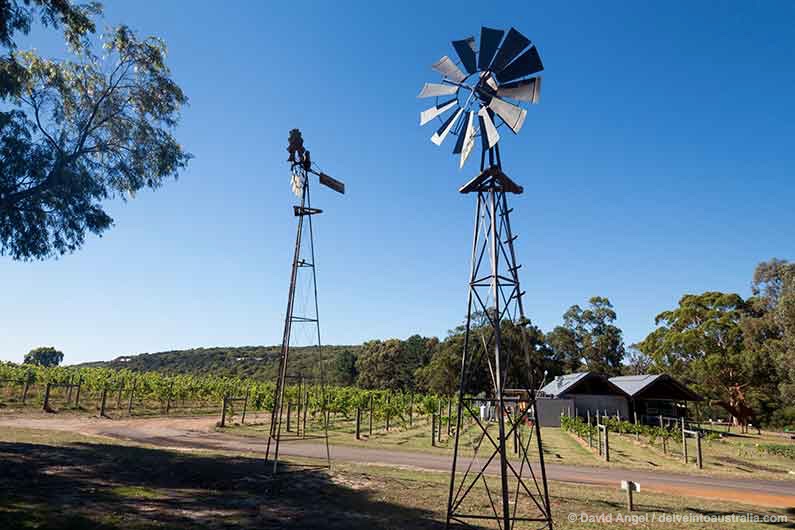 The Margaret River region is home to around two hundred wineries, and is unique among Australian wine regions in being so close to the sea – in this case, the Indian Ocean, whose cooling breezes keep temperatures lower than most of the rest of Western Australia.

Many of the region’s vineyards are located in the northern part around Yallingup and Dunsborough, with many others concentrated in the rural hinterland between the area’s two main routes, the Caves Road and the Bussell Highway, just to the north of the lovely town of Cowaramup.

You’ll find many high quality wines across the region, varying from Chardonnay and Sauvignon Blanc to Shiraz and Cabernet Sauvignon, and you can drop in and taste wine at any of the vineyards, or join one of the Margaret River wine tours to sample several and not have to worry about driving afterwards. If you’re looking at booking wine tours Dunsborough tourist office can also help.

Many of the wineries also have restaurants attached, mostly tending towards fine dining, something which we’d like to sample more next time we visit the area.

Apart from wine, there are plenty of other food and drink options in the Margaret River area, from breweries and a distillery to olive farms to chocolatiers all offering visitors a chance to sample and buy their produce.

The country around Dunsborough and Margaret River has also fed the Wadandi people for tens of millennia, and a fascinating way to learn more about this is on a tour with a Wadandi guide, explaining the cycle of seasons and various foods available at different times of year.

Various plants can be used for food or medicinal purposes, and different migrating fish are available to catch in different seasons.

A local Wadandi custodian offers several tours – the bush tucker experience is part of the Aboriginal Food Cave and Didge Tour. As part of this, you’re also taken foraging on a bushwalk, and see him playing the didgeridoo in the atmospheric surroundings of Ngilgi Cave. 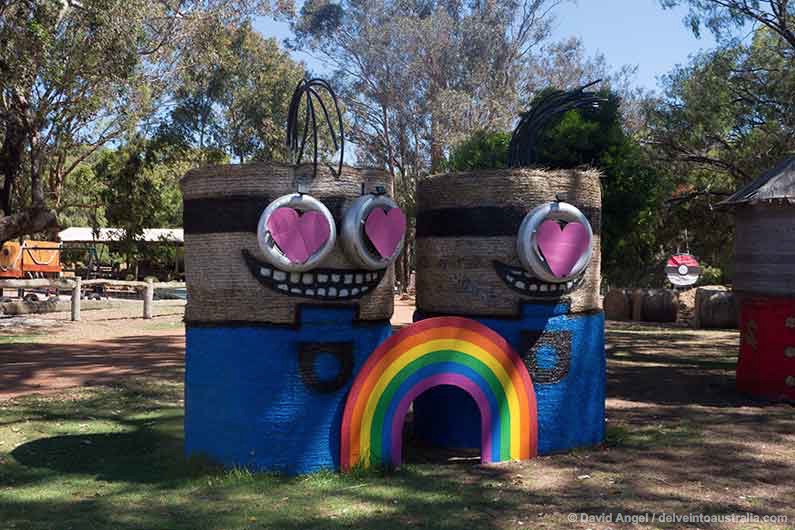 There is also a good range of Margaret River attractions for kids, and one afternoon we headed down Caves Road to Sunflowers Farm, where our son had a fantastic time meeting and feeding the animals.  We had a great time chatting with Pommy the long-beaked corella, and our little man adored feeding the goats, horses and little lamb. There was a lovely feel to the place, everyone was very friendly, and our little fellow said this was one of his favourite parts of the holiday.

There are also a couple of other similar attractions close to Dunsborough – Country Life Farm (watch out for the red double-decker bus by the side of the road) and the Wonky Windmill Farm and Eco Park which is on the road to Yelverton.

For most, the starting point in Western Australia is Perth.

We then followed the Bussell Highway to Busselton, opting to take the bypass south of the town, then taking a right turn at a roundabout meeting the Vasse bypass, then a left along Caves Road to Dunsborough.

You really do need your own vehicle in Dunsborough. We cannot recall seeing any public transport while staying there almost a week. You can get a coach from East Perth Terminal to Dunsborough – but once there, you’re stuck without your own transport. 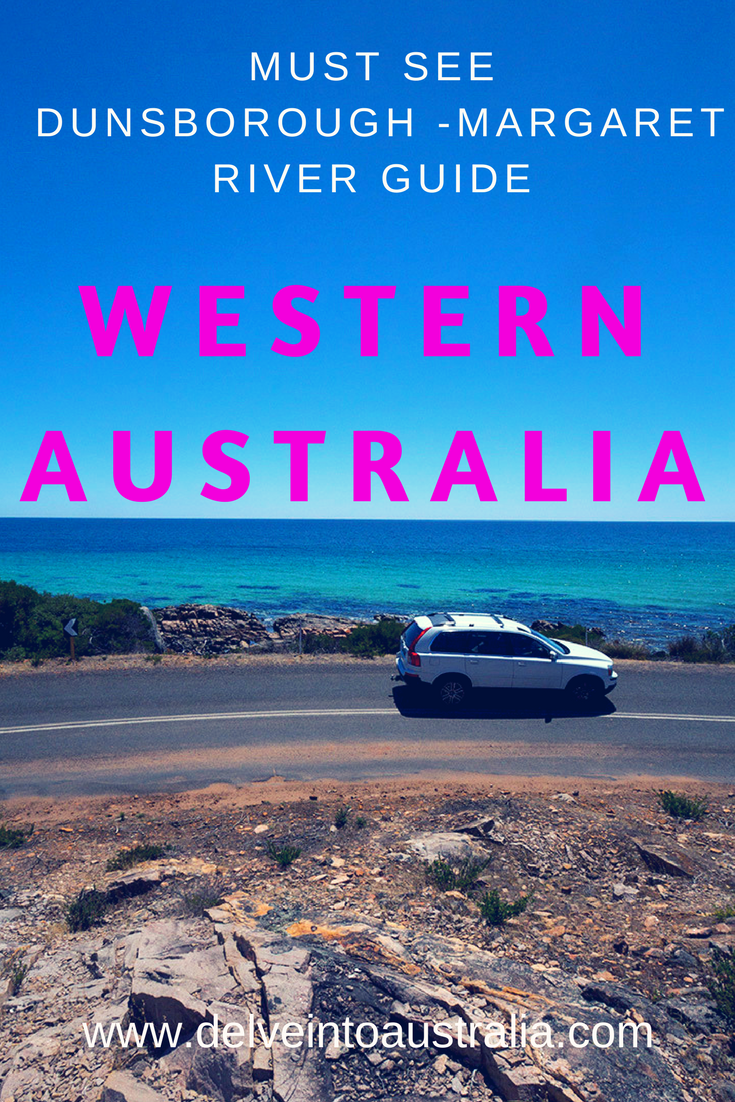 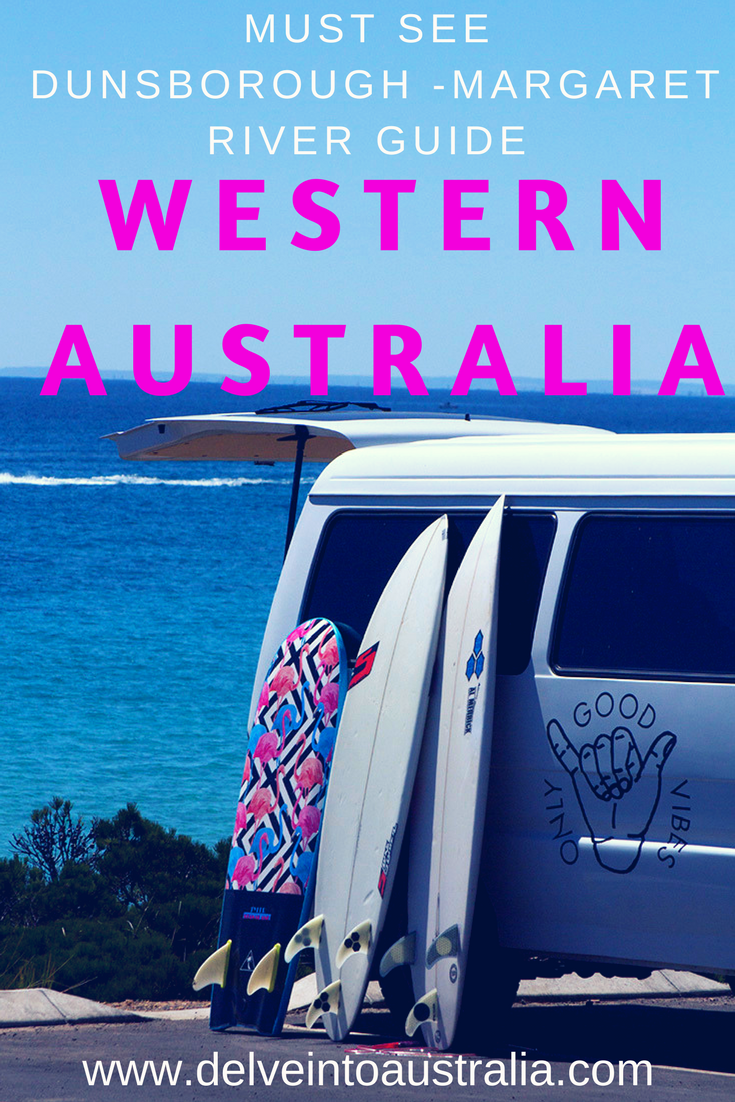 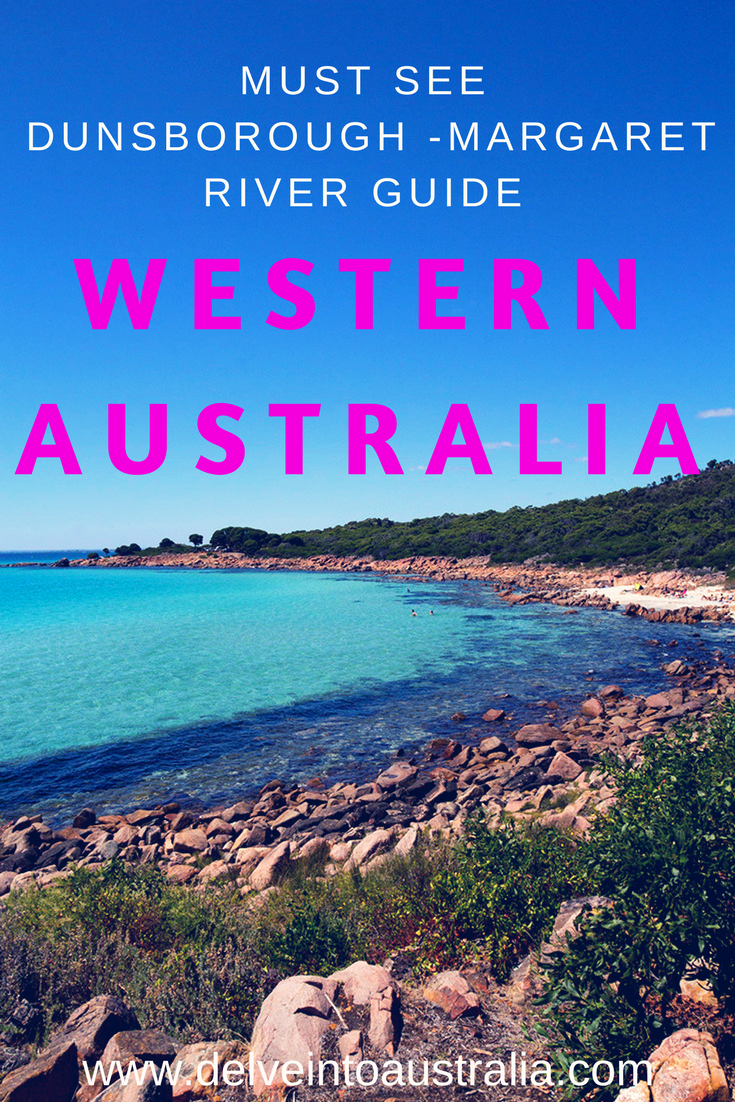